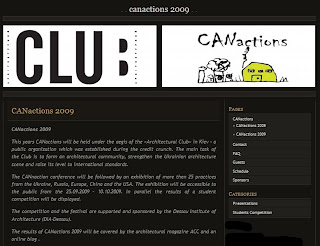 This years CANactions will be held under the aegis of the «Architectural Club» in Kiev – a public organization which was established during the credit crunch. The main task of the Club is to form an architectural community, strengthen the Ukrainian architecture scene and raise its level to international standards.
The CANnaction conference will be followed by an exhibition of more then 25 practices from the Ukraine, Russia, Europe, China and the USA.
The exhibition will be accessible to the public from the 25.09.2009 – 10.10.2009.
In parallel the results of a student competition will be displayed.
The competition and the festival are supported and sponsored by the Dessau Institute of Architecture (DIA-Dessau).
The results of CANactions 2009 will be covered by the architectural magazine АСС and an online blog.

TOPIC
Topic of CANactions 2009 is – emerging design tools across generations. This years CANaction is examining the actions and connections between different generations of architects and their relationship to emerging tools. The leap will be made over almost 4 generations of architects culminating in a symposium for the next generation of upcoming Ukrainian architects. As a connection between the different generations of architects we are investigating the influence of architectural schools and mass media, emerging tools and external consultants. The connection between international operating universities such as DIA in Dessau and the mass media is probably the most striking. The universities pass over the knowledge and sometimes develop new tools. But in what way do external consultants such as environmental engineers, structural engineers and landscape architects pass over a certain amount of common knowledge and tools. It is these connections and dialogues to leading external professionals such as AKT, Bollinger+Grohmann, Topotek1 and Transsolar that will be examined and exposed. Due to the internet emerging tools and publications from universities are spread with a high speed worldwide but external specialists are clustered mainly in London and the south of Germany.
How does such lack of consultancy influence architectural practice in the Ukraine and what does it mean for the development of the next generation of architects?