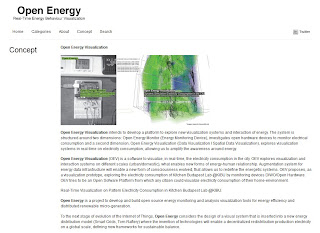 To the next stage of evolution of the Internet of Things, Open Energy considers the design of a visual system that is inserted into a new energy distribution model (Smart Grids, Tom Raftery) where the invention of technologies will enable a decentralized redistribution production electricity on a global scale, defining new frameworks for sustainable balance.

Open Energy Visualization is licensed under a Creative Commons.