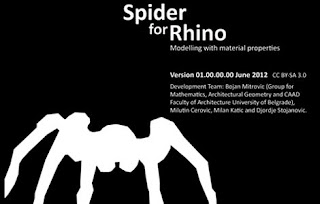 The Spider for Rhino is a plug-in created for the purpose of the specific and research oriented project. Originally it was used for the modelling of large web-like elastomer assemblies. It is conceived as a design tool and a tiny contribution to the fast growing field of architectural research aiming at better enacting of material behaviour within geometric modelling. The plug-in focuses on elasticity and allows for a simple simulation of approximate material properties. The idea is based on the simplified version of Hook’s law and relies on the particle-spring systems commonly used for creating physical simulations. Material properties, such as reversible deformation range and elastic modulus, are parametrically controlled to allow for iterative testing of different building materials. We hope this may open the door to other research related to optimization and form-finding.

Spider for Rhino is developed by Djordje Stojanovic

Link to 'Spider for Rhino' plug-in on food4Rhino
Pubblicato da Andrea Graziano a 09:27